Packer of the Week: Week 3

Welcome to a new column here on Titletown Sound Off where each week your third favorite writer you’ve never heard of (hey guys, it’s me, Nick Lauer) will write about his favorite Packer, based entirely on what transpired in the most recent game. This week Nick strays away from handing the award to another inanimate object and instead honors a player who suffered plenty of slings and arrows this past week.

There’s nothing like playing the Detroit Lions for your favorite team to find its groove again. Before last year, the Packers hadn’t lost to the Lions at home since the Coolidge administration. That’s just history. Look it up. Well, don’t really, just trust me. Sunday’s game felt like the good old days for a Packers team that had the contest locked up before halftime… and then in traditional Mike McCarthy fashion did everything they could to make it close at the end. Nevertheless, the Packers were able to field an offense that didn’t cause temporary blindness for its fan base and it all had to do with one fella returning to form.

This week, one Packer is able to put “Packer of the Week” on his resume, no doubt fulfilling a childhood dream of finally winning a meaningful award. That’s right, the Packer of the Week award goes to Aaron Rodgers. 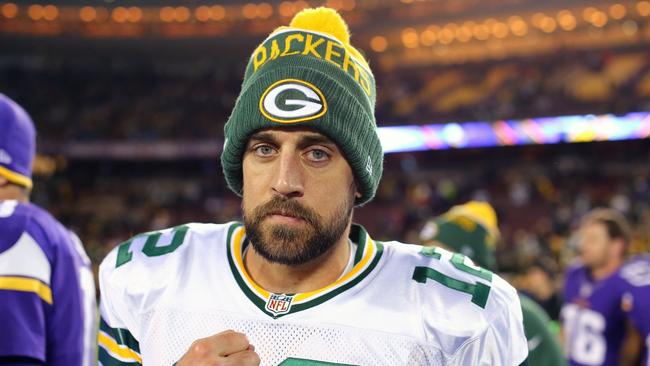 This is him not caring about this award. Rightfully so.

Coming off arguably his worst game as a pro or maybe his entire football career in general (I’m still catching up on all the footage from his Pop Warner days), Rodgers came out on Sunday playing like he had something to prove. My sources couldn’t confirm or deny this rumor, but it is believed he strictly listened to one song and one song only this week to prepare for the game.

He made Daniel-San proud, proving he’s still the best around by absolutely thrashing the Lions defense. How badly? Four touchdowns and close to 200 yards in the first half badly. Rodgers’ play resembled the Aaron Rodgers we have all known and loved for the past decade. Not only did his stellar performance give the Packers an insurmountable lead, but it also allowed Mike McCarthy the rare opportunity to sit the real Aaron Rodgers for the second half while everybody’s favorite doppelganger Tom Wrigglesworth sported a Rodgers jersey and quarterbacked the team for two quarters.

That’s a win-win for everybody.

In addition to Rodgers returning to form on Sunday, the Aaron Rodgers-Jordy Nelson combo also had a rousing comeback after a year off in 2015. That is enough to create many sleepless nights for every defensive coordinator on the Green Bay schedule for 2016. This may be premature, but all that is left to be said about the Packers offensive revival can best be summed up by Carol Anne Freeling…

« To Recap Week 3: How Rodgers Got His Groove Back
Titletown Sound Packers Podcast Episode 78: Can We Fix It? Yes We Can! »